Depending on when you were born, you may or may not remember a time before nutrition information appeared on food packaging at the grocery store. It didn’t exist until 1990, and the labeling requirements have gone through several changes in the years since. Last month, the FDA proposed changes to nutrition labeling, and it seems to have some people talking.

To put things into perspective, here is a timeline that shows some of the changes the FDA has instituted to the way nutrition information is provided on the food we buy.

1990
The “Nutrition Labeling and Education Act” (NLEA) is passed to amend the United States Federal Food, Drug, and Cosmetic Act which was a set of laws passed by Congress in 1938 giving authority to the U.S. Food and Drug Administration (FDA) to oversee the safety of food, drugs, and cosmetics. The NLEA requires all packaged foods to have nutrition labeling and all health claims for foods to be consistent with terms defined by the Secretary of Health and Human Services. This is the basic nutrition label we are currently familiar with.

1992
Basic per-serving nutritional information, are required on foods under the Nutrition Labeling and Education Act of 1990. Based on the latest public health recommendations, FDA and the Food Safety and Inspection Service of the Department of Agriculture recreate the food label to list the most important nutrients in an easy-to-follow format.

2003
To help consumers choose heart-healthy foods, the Department of Health and Human Services announced that FDA will require food labels to include trans fat content, the first substantive change to the nutrition facts panel on foods since the label was changed in 1992.

2004
The “Food Allergy Labeling and Consumer Protection Act” is passed requiring and food that contains one or more of the following: peanuts, soybeans, cow’s milk, eggs, fish, crustacean shellfish, tree nuts, or wheat to be labeled.

2010
The U.S. Department of Agriculture (USDA) and the Food Safety and Inspection Service (FSIS) – not the FDA in this case – unveiled a labeling rule for meats and poultry, with the rule being named the “Nutrition Labeling of Single-Ingredient Products and Ground or Chopped Meat and Poultry Products.”

Cut to February 2014 when the FDA proposed sweeping changes to the nutrition facts label with a focus on calories, updated serving sizes that reflect how people really eat (not what we “should” be eating), a requirement to include the amount of sugars added (meaning whatever is not naturally occurring), require the amount of potassium and vitamin D (nutrients that some in the U.S. population are not getting enough of), and eliminate the requirement to show the amount of Vitamins A and C. The labels would still be required to show “Total Fat,” “Saturated Fat,” and “Trans Fat” on the label, but “Calories from Fat” would be removed because research shows the type of fat is more significant than the amount. There would also be an updated format that emphasizes certain elements, such as calories, serving sizes and Percent Daily Value. 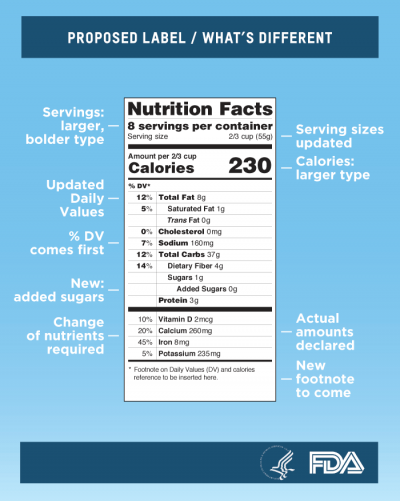 When the FDA wants to make a change like this there is a process they must go through first. In a nutshell, here’s how it works:

Once the comment period ends the FDA reviews them and then may or may not make additional changes to the changes that have already been proposed. Once the final changes are approved and become a requirement, food manufactures will have another 2 years to comply.

The changes are coming, that’s a done deal. But what are nutrition professionals saying?

Janai Meyer, RD, LD, IBCLC is a private practice Registered Dietitian and Lactation Counselor in Ketchikan who believes that while it’s just a tool, and it won’t be perfect, this change is a good start and a long time coming.

She likes the emphasis on added sugar vs. sugar in and of itself. She gave an example about yogurt, explaining, “You go to buy yogurt and you pick one that’s on sale or one you like and you look at the sugar and now you have no idea if the sugar is from the fruit and the milk or it was added by the manufacturer. With the new labeling system, that will be clear.”

Meyer is also enthusiastic about the change to the serving sizes and that it will reflect what people eat more accurately.

More positives, according to Ms. Meyer, include the focus on overall calories instead of calories from fat, the font change, and the ability for people to make more informed choices than they can now. She also likes that total carbohydrates will be in bold and in a larger font.

One of the things she believes should still be improved is the way sodium is listed. She would prefer that the “added sodium” content should be highlighted more prominently and printed on the label just as the proposed “added sugar” content.

Ms. Hennon is concerned about the potential effect the change in serving sizes might have. “We don’t want to send a message to the public that the serving size listed is the portion they should be eating.” Hennon points out that portion sizes have increased dramatically over the decades. In a time when over two-thirds of the American public is either overweight or obese (which can dramatically increase weight-related conditions such as diabetes, high blood pressure and heart disease), we should be encouraging people to eat less, not more. She very much likes the change in formatting, however, to make the calories per serving large, bold and clear.

As for the proposed changes to add Vitamin D on the label, she points out that the best source of Vitamin D is sunshine. Food is not the primary source of Vitamin D, except for fatty fish and fortified products that have had Vitamin D added where it does not naturally occur, such as milk. The FDA is also proposing that the potassium content of foods be listed. Hennon points out that potassium is abundant in fruits and vegetables; the fact that the FDA feels they need to list this reflects the fact that we as a nation continue not to eat enough fruits and veggies. She also feels the percent daily value (% DV) should not be emphasized on the label because people’s needs vary. When working with patients, she tends to point out the content in the food (in grams and milligrams) instead of the percent daily value. She agrees that the “calories from fat” is not useful and should be eliminated.

Hennon concluded, “Americans used to suffer from nutritional deficiencies such as scurvy from not getting enough Vitamin C to blindness from not getting enough Vitamin A. Now we tend to suffer from diseases based on excesses in our diet.” She agrees the food label should be modified to reflect change in knowledge and encourages people to use food labels to make informed food choices.

We’d like to know what you think. Does it seem like the proposed changes will be helpful for those of you trying to make changes or maintain a healthy diet? Are there additional things you’d like to see highlighted on the new nutrition labels? Tell us your thoughts in the comments section.